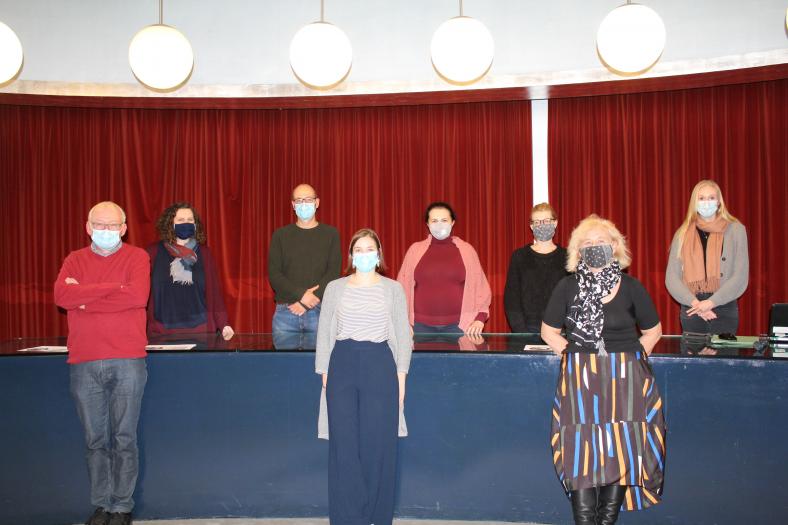 On Monday October 19th, a number of scientists from the permanent team as well as the temporary project collaborators of CegeSoma gave their colleagues an update on their current research projects. This afternoon of internal presentation was also an excellent opportunity to learn how to better link new faces (obviously masked) to their respective professional activities.

Among the expected results of the ADOCHS project is the elaboration of a quality control guide for cultural heritage digitization. Aimed at digitization departments in federal scientific institutions, the objective of this manual is to propose methodological tools ensuring the quality of the digital data produced at each stage of the digitization process, while allowing each person involved in this process to view his or her work as part of a production chain with a common goal. Chloé Brault is working on this manual since September 2020.
The first step in the development of this guide has been to review the existing literature on the subject in order to identify its structure. The objective being to address the issue in two stages. First, by recontextualizing what are the challenges, limits and perspectives of digitization, thus focusing on the theoretical and technical aspects of the question. Second, by developing case studies, presenting in concrete terms the guidelines to be followed guaranteeing the quality of digital images and related metadata throughout the process.
Indeed, ensuring the quality of a digitization project does not only consist in controlling  deliverables a posteriori. By proposing a guide combining theory and practice, the objective is to make the issue of quality a common thread requiring the implementation of good project management taking into account human, technical and procedural aspects in order to meet with realism the needs of institutions according to their means. This approach requires drawing on existing practices in federal scientific institutions, notably Cegesoma and the Royal Library of Belgium (KBR), the next step in the development of the guide.

The POSTWAREX project began at CEGESOMA in June 2020. From that moment on, Élise Rezsöhazy immersed herself in a series of very rich sources so far little exploited by historians with the goal of studying the macro-juridical aspect of the policy of executions carried out by the office of the  Chief Military Prosecutor (auditorat-général/auditoraat-generaal), The objective of this first stage of the research is to understand the framework in which the office of the  Chief Military Prosecutor and the offices of the military prosecutors (auditorats militaires/militaire auditoraten) were led to sentence to death and then execute 242 people in Belgium between 1944 and 1950. Who were the actors involved? What legislation guided them? What processes were put in place? How was the repression coordinated?

The State Archives preserve two archival funds transferred from the Palace of Justice in Brussels that answer these questions. The documents compiled by the General Instructions department of the office of  the Chief Military Prosecutor  between 1944 and 1953 and then by its documentation service plunge us into political, legal and very practical questions relating to executions through numerous formal and informal letters, circulars, memos and other reports. We are thus able to retrace quite precisely the implementation of the execution procedure and to confront the very concrete but also moral problems caused by these public executions. Exchanges between the office of the Chief Military Prosecutor, the offices of the military prosecutors, the Ministry of Justice and the Ministry of Defense reflect the existing balance of power between the different authorities and stakeholders in a tense political context while repression is at the heart of public debate. These archives also show the important role of coordinator of the Chief Military Prosecution Service, in permanent contact with the military prosecution departments carrying out  repression at the local level. Thanks to this pioneering research, the legal and political frameworks in which the executions took place can now be reconstructed.

Finally, Aline Thomas gave an update on the project "The Provincial Administration of Limburg during the Second World War – Inventory of Archives and Historical Research", which began in July 2020. The first phase, during which the inventory of the Second World War archives had to be reworked and updated, and an introduction to this inventory was written, has just been completed. The original inventory was problematic on two levels. On the one hand, for rather superficial questions - missing or incorrect dating, missing numbering, files not described, inadequate names of provincial departments and producers of archives, spelling errors, files misclassified, etc. On the other hand, this inventory posed problems at a more fundamental level, for complications related to its hierarchical structure which initially was rather messy and confusing, making it difficult to establish a satisfactory hierarchy of archives. Proper solutions were found for both kinds of problems. Adjustments and changes were made to the inventory so that the classification of the items, both thematic and chronological, now clearly reflects the tasks and responsibilities of the provincial government. The new hybrid filing structure is based on the different themes of major importance during the war, combined with the relevant provincial services (which acted as archive producers): price regulation and wages; passive air protection; food supply and rationing; assistance; winter relief; etc.
This revamped inventory will enable those interested in historical research on the provincial administration of Limburg during the Second World War to locate and request archival documents more efficiently. This work also gives Aline Thomas a better overview of the content and logic underlying (composition and origin) the archives. This acquired knowledge will be particularly useful in the second phase of the project, the historical research on the role of the provincial government during the war, which began recently.