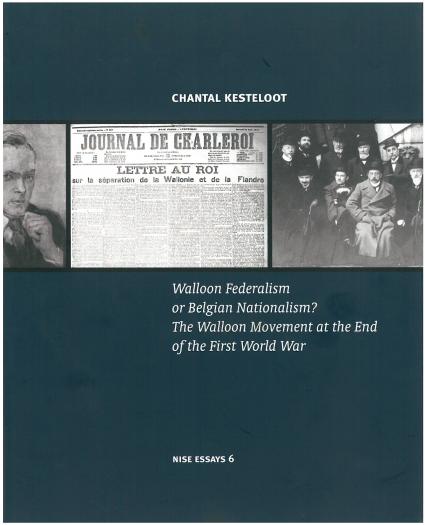 Much has been written about the history of the Flemish movement and the crucial importance of the First World War in its evolution. The history of its Walloon counterpart during the same period is much less known. It is true that the Walloon movement was a less important actor, but it is nonetheless interesting to see whether the winds of radicalism that blew over the Walloon movement in 1912 had a lasting effect.

For a long time, people were satisfied with the idea of a Walloon movement falling into lethargy from July 1914 to the spring of 1919, little or nothing happening between these two dates. Recent research has helped to nuance this vision. The Walloon movement, both in occupied Belgium and in Paris, was neither inactive nor silent, and the occupying Germans also took an interest in it. But what impact did this have at the end of the war, when Belgian nationalism seemed to triumph? Here also, research has mainly focused on Flemish nationalism, marked by the emergence of a new competing nationalist identity, in radical opposition with the Belgian fatherland. In short, a Flemish movement deeply transformed by the First World War....

A Walloon movement in full effervescence

On closer inspection, the Walloon movement also appears to be deeply marked by the First World War. It is far from the hesitations that characterized it before the war when it came to giving shape to projects for state reform. If the Walloon Assembly never really debated the question of federalism and its forms before 1914, it is quite different after the war. During the war various projects are prepared, usually in secret. The year 1919 sees intense debate, with no less than eight proposals ranging from two- or three-party federalism to regionalism submitted to the delegates of the Assembly. Eventually, the moderate approach prevails and federalism is temporarily sidelined.

The importance of these debates

Over a hundred years later and at a time when Belgium has officially become a federal state, these debates are interesting in many ways and allow for a better understanding of today's Belgium. They testify to the radicalization of the Walloon movement well before the famous "Walloon National Congress" of October 1945. They reveal how the war encouraged reflection. They already show the difficulty of choosing between a two- or three-party federalism. Through these debates, the whole question of legitimacy is also raised. At a time when the Flemish movement is being labelled as "activist", the Walloon movement is eager to show that its attitude during the conflict is beyond reproach. If the federalist projects are eventually brushed aside, it is because they might recall the administrative separation put in place by the German occupier. But the Walloon movement seeks above all to convince people of its irreproachable patriotic attitude. The two identities function in mirror image: to the compromise of one with the Germans, it is necessary to oppose the good patriotic choices of the other. From then on, and always in this perspective, no tolerance is possible for any form of Walloon activism. The movement wishes to gain in legitimacy. The entry of Jules Destrée into the government is one aspect of this strategy, the renouncement of federalism in late 1919 is another. The debates of 1919 reveal the extent to which some Walloon militants already wanted the end of a united Belgium. But the war and its impact are important factors in the long term... both in Belgium and abroad, for the Flemish movement as well as for its Walloon counterpart.