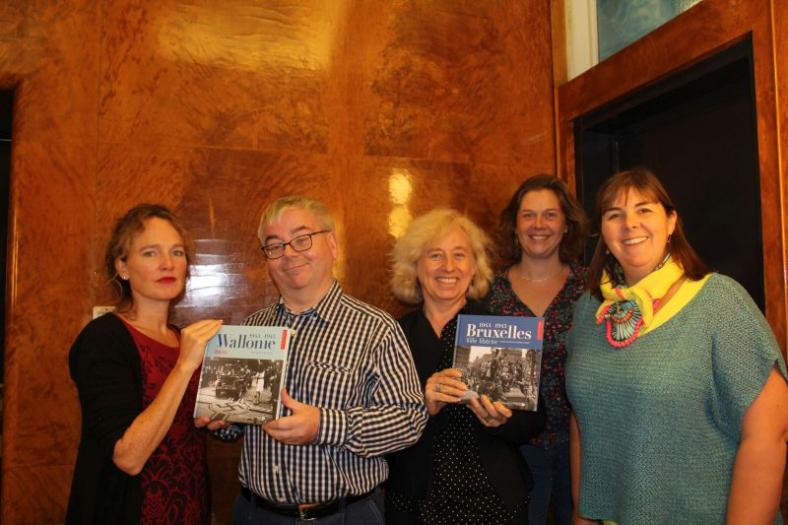 On 3 September 1944 in the evening, Brussels is liberated. In the course of the previous days, the city had been in upheaval. The last remaining collaborators became more nervous. German troops fled in utter chaos. On 4 September, the people of Brussels burst with joy into the streets of the capital, even if the war in Europe would only end on 8 May 1945.  Thanks to the rich collections of the Study Centre for Historical Research and Documentation on War and Contemporary Society (State Archives) and other holdings conserved by Belgian and foreign institutions and by private individuals, Chantal Kesteloot and  Bénédicte Rochet present a photographical historical overview of Brussels in the years 1944-1945.
Some well-known and iconic photographs of the Liberation are placed within their context and lead the way to other, lesser known pictures from professional and amateur phorographers and to the issues that marked the public life of the capital in these times.

A different perspective on the agitated weeks and months of the Liberation of Wallonia is proposed by Mélanie Bost and Alain Colignon on the basis of a careful selection of less- or better-known photographs chosen for their documentary-, narrative or aesthetical value, that originate from the collections of CegeSoma and other public and private collections. Here, the focus lies on the period from the landing in Normandy until the return of the prisoners (April-July 1945). Light is shed on the challenges that ordinary citizens had to face in order to live through these harsh times at the end of the war.

As a complement to the works already published in the series "Cities at War", the authors attempt to grasp the intimate lifestories of people at a key moment in history while keeping the focus on "our" small and big cities, bourgeois cities and industrial agglomerations in order to present an original approach of Wallonia between war and peace.

During this Conference-debate (in French) hosted by Anne Roekens, the authors will try to answer the following questions: How did the people in Brussels and Wallonia experience this period? Which photographs are still conserved? What do they tell us about the last months of Brussels and Wallonia at war and about the chaotic period that followed? What do they reveal about photographic practice in times of war? Etc.