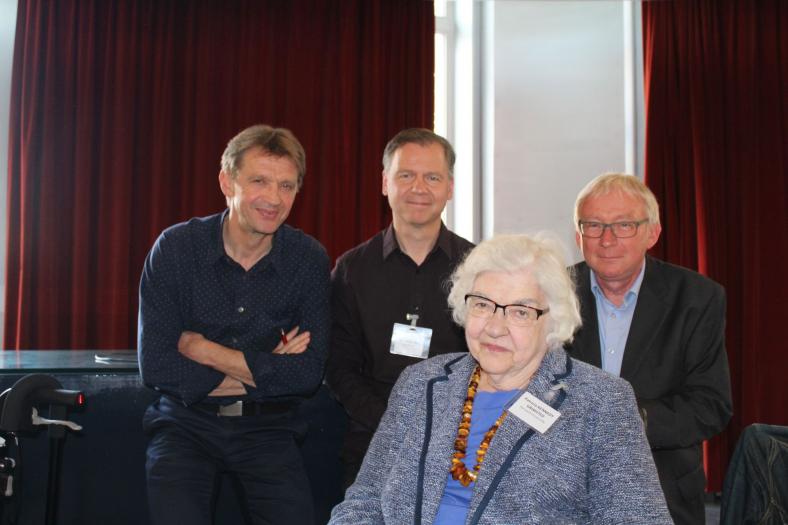 On 14 June 2019, Dr Patricia Kennedy Grimsted (Harvard University) was invited as the main speaker to a workshop organised by CegeSoma and AMSAB - ISG about the Nazi's plunder of cultural heritage in Belgium during the Second World War. She is an internationally renowned expert who has been carrying out research on this issue for decades and still works on the subject.
Together with Michel Vermote (AMSAB-ISG), Patricia Grimsted presented her latest findings about the plundering of libraries.The Nazis seized the cultural goods of their political opponents in the occupied countries. Some of this heritage was brought to Germany to serve as study objects for the planned “National Socialist University”. The Red Army for its part confiscated (some) of these goods and brought them to archive repositories in the Soviet Union to be used as political instruments of the Cold War. After the fall of the Berlin Wall, these repositories became accessible for research, goods looted by the Nazis were rediscovered and restitutions began.

During the workshop the Dr Kennedy Grimsted delved into the plundering of libraries by the Einsatzstab Reichsleiter Rosenberg (ERR) in Belgium. This Einsatzstab played a key role in the looting of cultural heritage, despite 'competition' from the SIPO-SD.
The ERR was able to get hold of the libraries of Socialists, Liberals, Jews, Freemasons and Jesuits, whom the Nazis all considered as political opponents, but they also seized books written by politicians such as Paul Van Zeeland or Camille Huysmans, and even those by the École des Hautes Études in Ghent that was considered as a French cultural 'intrusion' on Flemish soil.
Patricia Grimsted found new archival documents of the ERR, in particular in Kiev, including the so-called Arbeitsvorhaben (planned works) of this service, which gave new insights into the library lootings.
The workshop was introduced by Michel Vermote of AMSAB-ISG, a 'veteran expert' on archive spoliation: he played a key role in tracking down archive collections in the former Soviet Union in the 1990s and still closely collaborates with Dr Kennedy Grimsted .

Dr Kennedy Grimsted engaged in discussions with a number of Belgian and foreign experts and attendees. Colleagues from the Royal Library, the War Heritage Institute, the Royal Museums of Fine Arts of Belgium, ULB, the Africa Museum, the State Archives and Geert Sels, associated researcher at CegeSoma, took part in the workshop, as well as specialists from the Netherlands, France and the United Kingdom. The international nature of the workshop emphasizes the importance of a subject that has been received limited attention in the past.
Experts and other attendees stressed the innovative quality of the findings of Dr Kennedy Grimsted , addressed a number of methodological issues and referred to the importance of restitutions (in particular of works of art), and of adequate research into the provenance of goods – a field in which Belgium seems to have fallen somewhat behind.
National and international attendees deplored the fact that there is currently no structural initiative to clear this backlog, and there was a consensus about the need for a Belgian initiative regarding research and accessibility to information.

In the following interview, Dr Kennedy Grimsted (who is carrying out further research in Belgium in the week starting 10 June, at CegeSoma and elsewhere) briefly explain her findings.

For further information, please refer to the website of the ERR Project Cultural Plunder by the Einsatzstab Reichsleiter Rosenberg of the Claims Conference, where new information about Belgium will be available shortly.