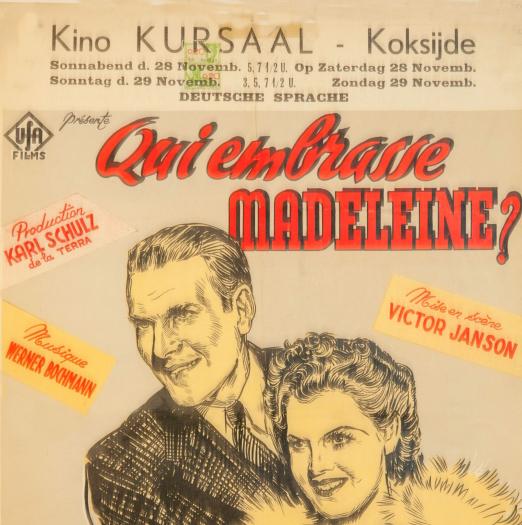 During the Second World War Nazi Germany occupied the majority of Western Europe, but the mode of occupation differed substantially from place to place. Some areas were simply annexed to the Reich, while others were governed by German military authorities. Others still were administered by German and / or local civilian authorities. In all cases the Germans reauthorized local cultural production in order to create a semblance of normalcy for civilians and to further their own political and economic interests. Newspapers and radio broadcasts reappeared. Cinemas, theatres and concert halls reopened their doors. Media and cultural personnel resumed their activities under widely varying degrees of German control. While the press, radiobroadcasting and newsreel production were often embedded directly into the propaganda apparatus of the Third Reich - with the goal of normalizing occupation and cultivating sympathy for Germany - contact with local media personnel gave rise to various forms of negotiation, conflict, compromise, and even resistance. Meanwhile, operating primarily from Great Britain, the Allies mobilized film, radio , and print media (especially pamphlets) to influence Europe’s occupied territories.

Though research on the cultural, political, social, and economic dimensions of propaganda in Nazi-occupied territories has a rich academic tradition, it is far from exhausted. There is still much research to be done in local, national, and especially transnational perspectives. There is also still significant potential for interdisciplinary investigation. This symposium will contribute to the development of new interdisciplinary and transnational research on media and cultural life in German-occupied Europe. Specific attention will be paid to the opportunities and challenges offered by the digitisation of archival collections, printed newspapers and audio-visual sources.

Building on the symposium “Cultures of Spectacle in German-occupied Belgium” held in Brussels in March 2020, this new symposium has a broader geographical scope (Belgium, France, Luxembourg and the Netherlands) and invites contributions from faculty and PhD students working on media policy and cultures in German-occupied countries during the Second World War (1939-1945). Contributions on Allied propaganda targeting occupied territories are also welcome.

The symposium will take place on November 7 and 8, 2022. The symposium will be hosted in Brussels by the CegeSoma, the fourth operational direction of the State Archives and the Belgian centre of expertise for the history of 20th century conflicts. (The conference venue is within walking distance of Brussels South Train Station.) Registration will be free; foods and drinks will also be provided but participants must cover their own lodging costs and make their own arrangements.

The working languages are English, French, German and Dutch.

If interested, kindly use this online form to submit an abstract and a short biography. Kindly submit your proposal no later than July 1. The advisory committee will review the abstracts, select a number of proposals and make a draft programme. All selected researchers will be notified before August 1.

This symposium is sponsored by the Scientific Research Community 'Cultures of Spectacle' (FWO Research Foundation Flanders), in collaboration with the Study and Documentation Centre for War and Contemporary Society (CegeSoma), the Institute for Media Studies (KULeuven) and Irhis (Université de Lille). The Research Foundation FWO is providing additional support.