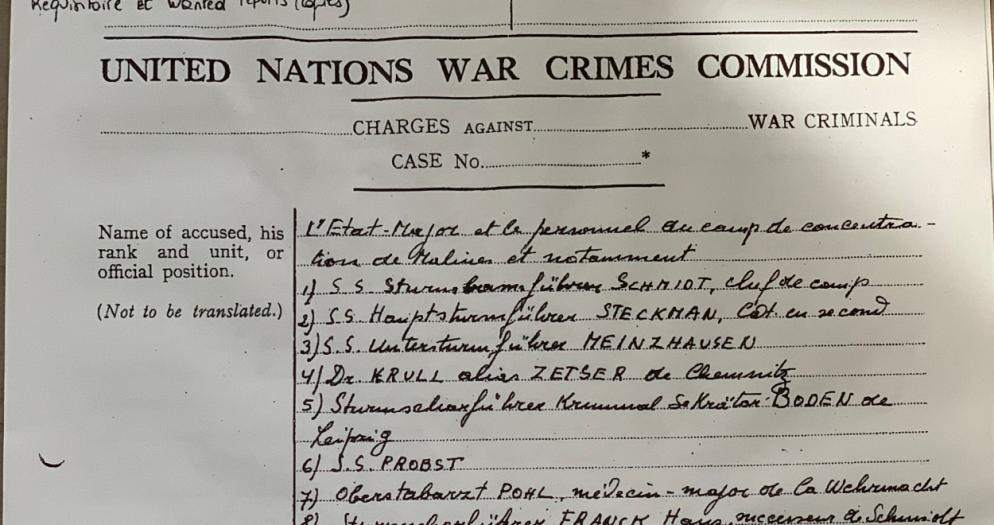 As the summer holidays approach, the Belgium WWII website offers you a series of new features that will allow you to discover various aspects of the history of Belgium during the Second World War.

Provincial governors, a little-known but essential cog in the wheel

The provincial governors are among the little-known administrative and political cogs of the Belgian administration. During the occupation, however, these positions were coveted by the New Order formations as they sought to come to power. Several portraits of governors are now online: Georges Devos, Jan Grauls, Georges Petit, Antoine Leroy, Jozef Lysens, Albert Houtart. The list is far from being closed: others will follow...!

Volunteers on the Eastern Front

On several occasions, the question of volunteers' involvement with Nazi Germany on the Eastern Front has been the subject of news debate. Who were they? Why did they leave? What do we know exactly about their involvement locally? In a new entry, Nico Wouters reviews what we know about these volunteers.

The Belgium WWII website also looks back at several events that marked the history of the occupation and its aftermath. In April 1941, what could be described as Antwerp's "Kristallnacht" took place, although there were no deaths recorded. A month later, several thousand workers crossed their arms, an unprecedented phenomenon known as the "Strike of the 100,000". Following the Wehrmacht's invasion of the Soviet Union on 22 June 1941, the occupying forces launched "Operation Sonnewende", during which 400 people were arrested. They were mainly communists but also some socialists and Trotskyist militants. Among them was René Delbrouck, a member of parliament from Liège, who died in Neuengamme on 20 June 1942. The site also looks back at the 75th anniversary of the destruction of the Yser Tower, an act probably committed by former resistance fighters but whose perpetrators were never found.

Until now, diplomatic history was hardly present on the site. Little by little, this aspect will also be addressed. At this stage, three contributions already offer an interesting look at the subject: the figure of Paul-Henri Spaak is the subject of a comprehensive presentation, together with that of Emile de Cartier de Marchienne, "the rock who saved the Belgian government" and who played an important role both in the presence of Belgian ministers in London and in the response to the famous instructions sent from Bern by Count Louis d'Ursel to Belgian diplomats, a key element in the dispute between Leopold III and the Belgian government in London.

When justice takes over...

Finally, several contributions open up the complex aspect of post-war justice, starting with the setting up of the War Crimes Commission, but also with a closer analysis of two important trials: that of the GFP 530 and that of the Sipo SD of Charleroi. In the first case, thirteen German agents of the Geheime Feldpolizei were convicted before the Brussels military court. The second was a landmark case because, at the end of the appeal procedures, article 118 bis was found to be inapplicable to military personnel and civil servants of "enemy" nationality acting at the time of the events on behalf of the Occupying Power.

But the Belgium WWII website is also an opportunity to stimulate reflection on current issues. We come back to the controversy related to the presence of a monument in honor of Latvian prisoners of war on the municipality of Zedelgem and also to the past of Frantz Van Dorpe, politician, resistance fighter but also... anti-Semite.

Other news
Results of the ADOCHS project
Call for papers
Marie Curie fellowship for Adina Babeṣ-Fruchter
JOB VACANCY
ADOCHS study day: Register now!
The Resistance in Belgium: a debate
The CegeSoma photo library is back in the Square de l'Aviation
New reservation system for the reading room (as from 15 june)
A Belgian researcher in the archives of Pius XII, the wartime pope
Special issue of 'De Leiegouw' about resistance and collaboration
The censored and underground press of the two world wars now accessible via the Abraham online catalog
Was grandpa a hero?